Ming Li, associate professor of electrical and computer engineering (ECE) at Duke Kunshan and a research scholar at Duke University’s ECE Department, received an award from International Speech Communication Association (ISCA) for the best paper published in the organization’s official journal, Computer Speech & Language, between 2013 and 2017.

Li was the first author of the award-winning paper titled “Automatic speaker age and gender recognition using acoustic and prosodic level information fusion” (Computer Speech & Language 27.1), co-authored with Kyu J. Han and Shrikanth Narayanan. The paper had been cited 118 times as of Sept. 17, 2018, according to tracking by Google Scholar Citation.

Computer Speech & Language publishes reports of original research related to the recognition, understanding, production, coding and mining of speech and language. Li won the award at the Interspeech 2018 conference in Hyderabad, India.

‘I was excited and honored to receive this important recognition,’ Li said. ‘New technologies and tools in data science can be applied in many fields, bringing big and welcoming transformations in our lifes.’

The paper presents a novel automatic speaker age and gender identification approach that fuses several different but complementary methods at both acoustic and prosodic levels to improve the overall system performance. This technology has been used in many call center applications to provide customized services. 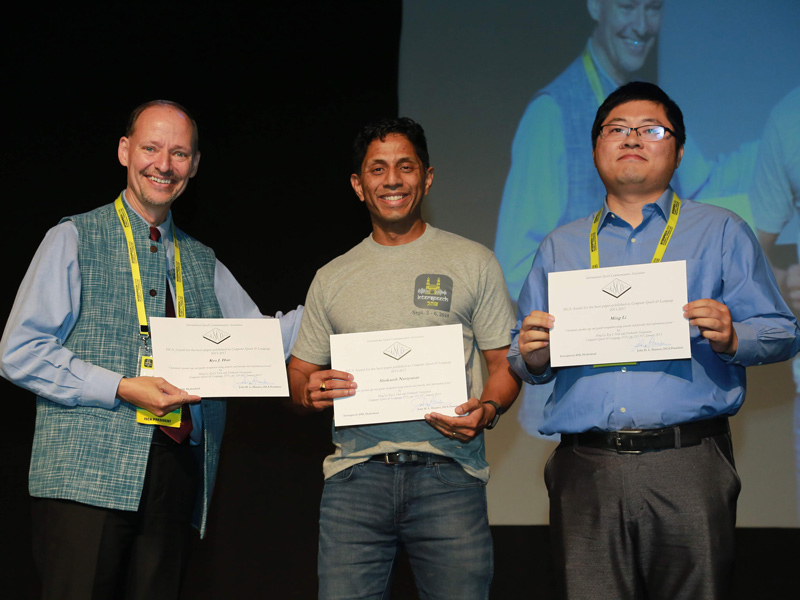 ‘Ming Li is a member of the inaugural faculty for the newly launched undergraduate degree program in the fall of 2018,’ said Haiyan Gao, vice chancellor for academic affairs at Duke Kunshan. ‘This international recognition highlights the world-class faculty and research strength our university is building in the areas of data science and ECE where Li works.’

Li received his Ph.D. in electrical engineering from the University Southern California in 2013. His research interests are in the areas of speech processing and multimodal behavior signal analysis.

He has published more than 90 papers and served as the member of CCF speech language and hearing committee, CAAI artificial psychology and affective computing committee, APSIPA speech and language processing committee, area chairs for Interspeech 2016 and 2018.

Works he has co-authored with his colleagues have won first prizes at the Body Computing Slam Contest 2009, Interspeech2011 Speaker State Challenge and Interspeech2012 Speaker Trait Challenge, as well as best paper awards at the IEEE DCOSS 2009, ISCSLP 2014, IEEE CPTECE 2018.